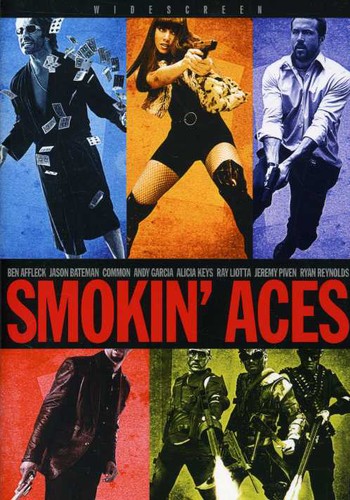 When a Las Vegas performer-turned-snitch named Buddy Israel (Jeremy Piven) decides to turn state's evidence and testify against the mob, it seems that a whole lot of people would like to make sure he's no longer breathing. Also starring Ben Affleck, Jason Bateman and Andy Garcia.

Fresh from his success with HBO's ENTOURAGE, Jeremy Piven gives his career a further boost by taking the lead role in director Joe Carnahan's (NARC) fast-paced thriller, SMOKING ACES. Piven plays Buddy "Aces" Israel, a former Vegas performer who has holed up in the penthouse suite of a Lake Tahoe casino after what seems like half the planet decides they want him dead. The reason for this bloodlust stems from Israel's dalliances with the mob, who have put a $1 million price tag on his head after discovering he is about to tell all to the feds. The only people who don't want to put a premature end to Israel's life are two FBI agents, played by Ryan Reynolds and Ray Liotta, and their boss, Andy Garcia. As various assassins attempt to put an end to Israel's pitiful existence, a parade of celebrity cameos ensues, including Alicia Keys, Common, Ben Affleck, and Jason Bateman.

Carnahan soaks the screen with vivid primary colors, lots of flashy set pieces, and plenty of guns and violence as his movie thunders from one explosive scene to the next. The shooting style, script, and acting are all highly indebted to Quentin Tarantino's early works, and the impressive ensemble cast will ensure plenty of PULP FICTION comparisons. Standout performances come courtesy of Piven and Liotta, with the former reveling in a character surrounded by burly bodyguards, cheap hookers, and a blizzard of cocaine as he sweats and paces around his penthouse hideout, ultimately awaiting either freedom or death as the movie nears its spectacular finale.
This website uses cookies to personalize content and analyse traffic in order to offer you a better experience.
I accept Learn More
back to top